Since 1986 I have been gathering information about the life and career of my relative, Flying Officer Malcolm Ravenhill. It all began during a visit to the Royal Air Force Museum at Hendon, London. My late parents noticed Malcolm’s name on the “Roll of Honour” in the recently-opened Battle of Britain hall. At the time they knew very little about him. My mother remembered that Malcolm lived in a large house at Norfolk Road, Sheffield, which they had visited in the past. She recalled talking about Malcolm with one of my Father’s relatives, although the family rarely mentioned him due to the sadness of his loss. She only knew that they referred to him as “Mac”, and that he flew fighter planes during the Battle of Britain. Unfortunately our side of the Ravenhill family has diminished over the years, and as far as we knew, my Father and I were the only surviving next of kin.

With excitement we decided to try and gather more information about our relative. Our first port of call was, again, the Royal Air Force Museum at Hendon. We promptly received a reply informing us that F/O Malcolm Ravenhill had been shot down whilst flying a Hawker Hurricane at 10:40 a.m. on September 30th 1940. His Squadron (229 Squadron) at that time was based at Northolt aerodrome, West London (coincidently only 15/20 minutes by car from our own home). His aircraft (P2815) crashed and subsequently burned in a field at Church Road, Ightham, Kent. For further information we were advised to contact the Ministry of Defence in Gloucester to obtain certified copies of his service records.

Although a slow process, one contact eventually led to another, and in 1991 I was advised to place an advertisement for help in the Royal Air Forces Association (RAFA) magazine “Air Mail”. The following advertisement subsequently appeared in the Winter edition: 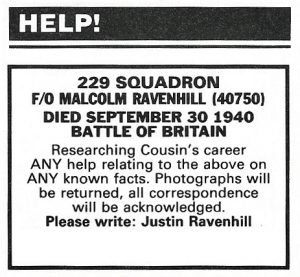 It soon became apparent how many people read the “Help” section of this magazine when I started receiving many kind responses to my advert, and to those people I am forever grateful. My real surprise came when I started to receive correspondence from former 229 Squadron personnel, providing an insight into Malcolm’s character as well as his career. Each letter helped piece together the large jigsaw, providing new contacts, information and even photographs.

With more material becoming available on the internet I will endeavour to find out more. I’d like to thank all those people that have helped me with my research, and look forward to continuing this project, hopefully building a complete profile on one of our proud “Few”.